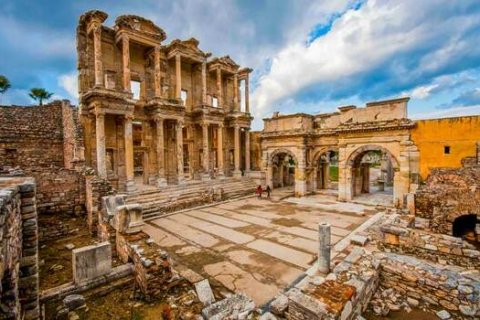 Turkey, a country with a long, rich history and beautiful nature, attracts plenty of tourists from all over the world every year. Some of them even decide to buy real estate in Turkey. Its ancient monuments, magnificent landscapes, delicious cuisine, the mixture of Asian and European cultures make this country so special. Here we offer top-10 places that every tourist must see in Turkey.

Before the Turkish conquest in 1453, this building had been used as a church. Then, it was converted into the mosque. And now, since 1935, it operates as a museum. Being one of the best preserved ancient buildings, it impresses with its architecture and the mix of two religions.

Located in Istanbul, this palace served as a residence of the Turkish sultans for more than 400 years. The palace was built in the 15th century, but it was rebuilt and added over and over since that many times. Its sophisticated interior and the mosaics demonstrate the greatness of the Ottoman Empire.

This museum is located in Konya. Also known as the Green Mausoleum, it is dedicated to the Persian poet Rumi or Mevlâna. His tomb is situated in this museum. The Green Mausoleum is also a lodge to the order of dervishes (the Whirling Dervishes). This order believes that dancing can help forget about a physical body and become closer to the God.

Some people call Pamukkale the eighth wonder of the world. The white travertine terraces look like a mountain covered with snow amid green fields. Another reason to visit this place is the ruins of ancient Roman city Hierapolis.

This city was a capital of one of the Roman provinces. It is located in the west of the country. The main monuments of the city are the Library of Celcus and the Temple of Hadrian.

Göreme is an open-air museum in the central part of Turkey, in Cappadocia. It is a complex of ancient churches and chapels dating to the 9th century.

It separates the Golden Horn and the Sea of Marmara in Istanbul. It is an old part of the city where you can see the Topkapı Palace, Gülhane Park. The Seraglio point was added to the UNESCO World Heritage list in 1985.

Troy is situated in the northwestern part of the country. This is the place where the famous Trojan War described in Homer's epic poem, the Iliad, took place. Now this place is on the list of UNESCO World Heritage. Here you will find a wooden replica of the Trojan horse, which is so popular with children.

The Ihlara Valley is a part of Cappadocia where the township with the same name is located. This place is famous for numerous churches decorated with ancient frescoes.