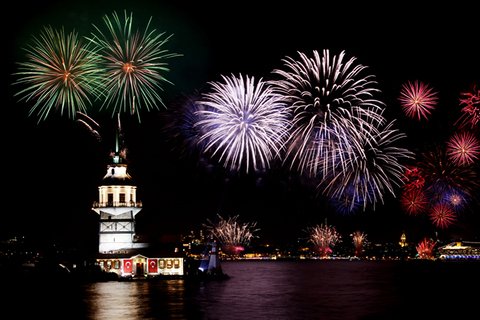 The Turkish are cheerful and welcoming people who celebrate their holidays generously. Those who bought property in Turkey and have lived there for a long time may have noticed that sometimes the streets get empty and it seems like the time has stopped, or on the contrary, suddenly crowds of people fill up the streets and they walk for days on end. And tourists who come to Turkey only for two weeks in June can also see how the Turkish celebrate their holidays.

There are eight state holidays. But there are also religious holidays which are even more important and popular than the state ones. So let’s see what holidays are celebrated in Turkey.

Most public holidays in Turkey were established in the twentieth century. Some of them are common holidays, like New Year, and some of them are memorable dates of the Kemalist Revolution. One of the most important days is May 19, which is the Commemoration of Atatürk, Youth and Sports Day. That day in 1919, Mustafa Kemal Ataturk landed in Samsun and started the Turkish National Movement encouraging young people to start a struggle for Turkey's independence. That is why this day is considered one of the main holidays in the country.

Before May and Youth and Sports Day, the Children's Day is celebrated. It is held on April 23 and was established by Mustafa Kemal Ataturk who thought that the nation's future starts in the childhood. The streets and schools of the cities are usually decorated with flowers and balloons. Children choose their mayors and deputies. There are different competitions and concerts. Parents give presents to their children.

One more important public holiday is the Republic Day, which is celebrated on October 29. The Turkish Republic was proclaimed in 1923. In dedication to this date numerous concerts, demonstrations and parades are held.

It is also worth mentioning Labor and Solidarity Day which takes place on May 1 every year.  May 29 is Istanbul Conquest Day, the conquest of the city by the Ottomans from the Byzantines in 1453. Another public holiday is February 10, the day of Commemoration of Atatürk. This day most entertainment venues are closed and you can see TV shows dedicated to the first Turkey's president.

Turkey is a Muslim country. That is why many religious holidays are more important than the state ones. The Muslim holidays are determined by the lunar calendar, so their dates can vary.

Ramadan is the holy month during which all Muslims begin to fast and don't eat from dawn till the evening prayers. The end of Ramadan is devoted to general cleaning and preparations for Ramazan Bairam, the day when people eat sweets and give each other presents, buy new clothes, go to the cemetery and give alms to the poor. In 2020, Ramadan will start on April 24 and will end on May 23.

Kurban Bayrami is the holiday of Sacrifice which is celebrated 70 days after Uraza Bayrami and lasts for 4 days. According to the legend, prophet Ibrahim got God's command to sacrifice his son. It was a kind of a test of his faith. When Ibrahim was ready to sacrifice his son for God's sake, he was astonished to see that his son was unharmed and instead of him there was a ram slaughtered. Nowadays this day people cook meat, eat it with their family, and give food to the poor.

One more important holiday is the Prophet Muhammad's birth, which is widely celebrated and is well known all over the world. The birth and ascension of Muhhamid the Hijri New Year (the Hijra year was the first year of Muslim lunar calendar), Night of Decree (the night when the first suras of the Quran were revealed to Muhammad from Allah), Bara'at Night (the night when Allah may forgive sinners) are other religious holidays.

There are a lot of different folk festivals in Turkey and they may differ from region to region. The traditional celebration of these holidays is very strong in province and some of them are also popular in big cities.

One of the most popular festivals is Hidrellez or the first day of the “early summer” which falls on May 5-6. It is believed that every year this day the prophet Hizir, the symbol of spring and good omens, wanders and helps people. This day people serve dinner, buy new clothes and give alms.

The next well-known festival is Nowruz which occurs on March 21, the day of astronomical Northward equinox. People usually visit their friends and relatives, eat pita bread, set off fireworks and organize concerts of folk groups.

One more widespread festival is the so-called Mevlana festival which takes place in Konya between December 10 and 17 in commemoration of a famous philosopher, poet and the founder of non-orthodox Islam and the brotherhood of whirling dervishes Jalaluddin Rumi, known as Mevlana. Dervishes believe that union with God is possible through the dance (sema). This dance lasts for three hours and is really spectacular and fascinating performance!